Roger Clyne and the Peacemakers

Home  »  Roger Clyne and the Peacemakers

The most awaited concert of the year in Rocky Point

One of the most beloved bands in Puerto Penasco by visitors is Roger Clyne and the Peacemakers (RCPM). Visiting Rocky Point 3 times a year, you can enjoy their presentation starting in January at JJ’s cantinta with the well-known January Jam at JJ’s performing since 2008, followed by two more performances on of them called “Circus Mexico” that regularly take place in the months of May and October.

Roger Clyne and the Peacemakers are a well known rock band from Tempe Arizona that have become popular for their excellent music that mixes genres such as pop, reggae and influence of mariachi.

RCPM are also known for their excellent presentations in Mexico, Puerto Peñasco. Attending and RCPM concert ensures a weekend full of fun as other entertainment events and sports always complement their amazing shows.

This year Circus Mexicus will take place from June 9 – 12th, sponsored by Mexican Moonshine this year will have the usual Sun, Sand, Tacos, Tequila and of course Rock n Roll. Named by New Times magazine #11 on the “101 Bucket List for things to do before you die” and voted the “Best Rock-n-Roll Road Trip” this is an event you can’t miss and definitely the best way to see a show of Roger Clyne and the Peacemakers.

11:00am – Mananathon at JJ’s Cantina with multiple bands
Sunset Sets at Banditos

Circus Mexicus is one of the mayor events in Rocky Point as big as Labor Day or Memorial Day so Hotels and Condos fill up quickly, Book your Room as soon as possible click here to View Rates

To get more update on the Bands and Circus Mexicus Like Us on Facebook.com/PuertoPenascoMex 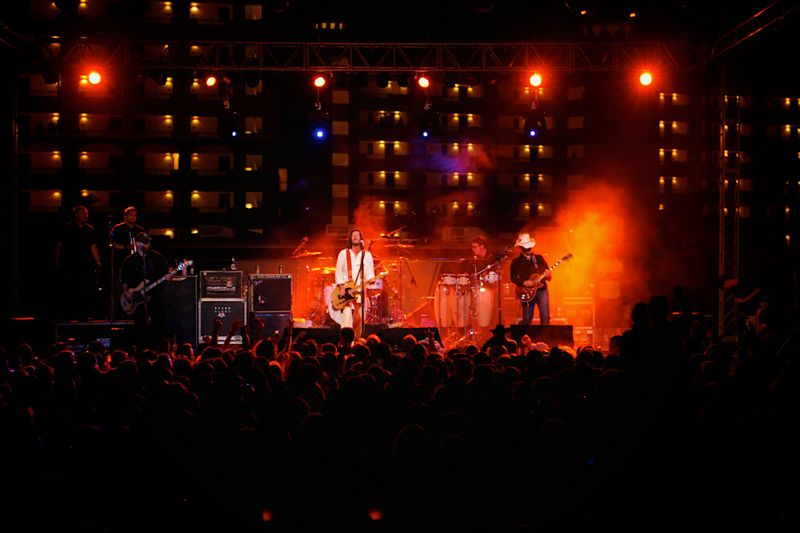 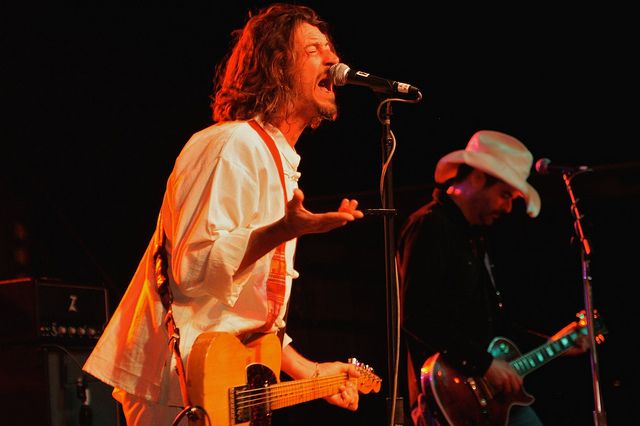 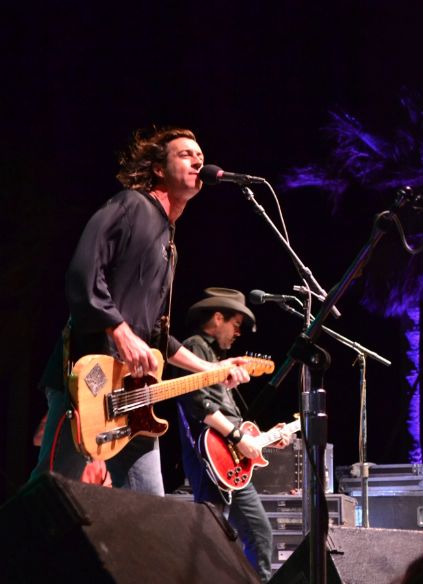 About other Roger Clyne Concerts

Once again Roger Clyne and the Peace Makers had done it again!  This past January 26th at JJ’s Cantina at Choya Bay, around a thousand people had the oportunity to enjoy the music of RCPM, and the 6th time of the January Jam, they will be coming to town this coming June 6-9, 2013 for the Circus Mexicus XXII.  Can’t wait for June to have Roger and the Peace Makers back again in Rocky Point.

Check out Rates for this unique event… this year you cannot miss it… Visit our RCPM 2012 Summer Concert Gallery.

Roger Clyne and the Peacemakers are kicking off the 2010 Tour Season in Rocky Point, Puerto Penasco. The group will be in Rocky Point on Saturday, JANUARY 30th, at JJ’s Cantina.

Ticket will be on sale for $25 each. If you need tickets you can purchase them here:

The Roger Clyne and the Peacemakers will be touring the UK in February. However, they are back to Rocky Point on June 12th for their biggest party concert ever CIRCUS MEXICUS 2010!!!!

We jut got word that there will be a Roger Clyne and the Peacemakers Concert in June 2009 sponsored by Chonga’s. Chonga’s Sports Bar will be the site of Roger Clyne’s June 2009 Circus Mexicus concert in Puerto Penasco, Mexico. Located next to Las Palmas Beachfront Resort, and the Sonoran Spa and Sonoran Sea Resorts on Sandy Beach, the new venue promises to be a great improvement for concert goers. We will update this page as we more information becomes available.

Roger Clyne and the Peacemakers concert might also be in Puerto Penasco on October 11th (Saturday). Get ready for a weekend of fun and events building up to the night of the concert and beyond. Location for this event is TBD. Last year’s concert was a blast and the schedule for the entire weekend Friday, Saturday and Sunday was unbelievable. As the date gets closer, we will post the weekend itinerary. It is not available yet. As a reference, we are have kept the itinerary for the May concert (held May 17th) to give you an idea of what to expect. So get ready and book your room right away. It gets pretty busy and crazy down there.

Click here to book a resort, hotel or home.

A copy of the May itinerary follows:

DIA UNO
Friday, May 16 @ Sunset Cantina
A Hot Dog and a Smile

Jones Soda is helping to sponsor the event and will be donating customized RCPM Jones Soda. All proceeds will go to Esperanza para los ninos.

DIA DOS
Saturday, May 17 @ the RCPM concert venue next to the Sunset Cantina

Bloody Mary drinks are discounted and Roger, P.H., Steve & Nick – and Angie too! – will all roll in at some point… though each at their own pace. Enjoy the views from the open-air cantina made even more famous in several RCPM songs

Read more information on the group below…….

Roger Clyne & The Peacemakers have become such a hit in Rocky Point, we just feel it is important for us to give everyone a little bit of information on the group.

I was lucky enough to jam at one of the last Roger Cline & The Peacemakers concerts in front of Marina Pinacate. That was one of the funnest concerts I have been to. What amazed me the most was the mix of people. Laid back, kick back, relaxing personalities. Not to mention, the music was just amazing. I had a blast.

We started drinking at our condo. We grabbed a taxi that took us down to Marina Pinacate and the rest is somewhat of a blurr. I just remember jumping and dancing and having a great time with my closest friends. Unlike other concerts I have been to, it was almost like a Woodstock environment. Everyone was just relaxing, and having a good time. People were not looking for trouble. That seems to be what I get when I go to many concerts. Not Roger Clyne. Love, Music, and Friendship…

Please take a look at some of the photos taken by Roger Clyne & The Peacemakers. Just to give you an idea of the atmosphere that is portrayed at their concerts.

Archive information follows to be used as reference of past events

NEXT MAJOR EVENT:
Roger Clyne & The Peacemakers will ring in the new year and head down to Puerto Penasco, Mexico on January 3, 2008 to write, record, and mix a new collection of songs. The band will set up their own recording studio in a house on the coast of the Sea of Cortez where, accompanied by their long time amigo and producer Clif Norrell, they will live, write, and record together for 8 consecutive days.

The band will engage in a spontaneous, creative musical process by bringing all artists’ influences to bear in coaxing rhythm, melody, cadence, structure and lyrics until they have (hopefully!) created one finished musical composition each day. Expected ingredients planning to be mixed up in the Mexi-potion are, but not limited to: early mornings, late nights, discipline, debauchery, decibels, silence, sunrises, sunsets, campfires, horseshoes, cantinas, mariachis, guitars, horns, cervezas, federales, banditos, hangovers, harmony, dissonance, taco stands and most certainly tequila.

The band will be bringing the entire process to everyone as well, by uploading daily video and audio reports to their website.

Roger Clyne & The Peacemakers will conclude the creative operation with the January Jam @ JJ’s Cantina. The small and very limited ticketing event will take place on Saturday January 12, 2008 at sunset. You are hereby invited to be one of the first to hear what new musical distillation RCPM will create! Tickets will be $20 and sold online ONLY starting Saturday December 8, 2008 at 9am (Mexico time). You can pick up your tickets at JJ’s Cantina beginning at 12:30pm day of the show. Turn in your Christmas wish list, get your January Jam at JJ’s tickets and be among the first to hear the new recordings. There will only be 500 tickets sold so grab your friends, hire your designated driver, pack some warm clothes…it may get chilly, and carpool down to JJ’s Cantina for a one of a kind rock-n-roll celebration.

Have a comment? Want something added here? Drop us an email! )