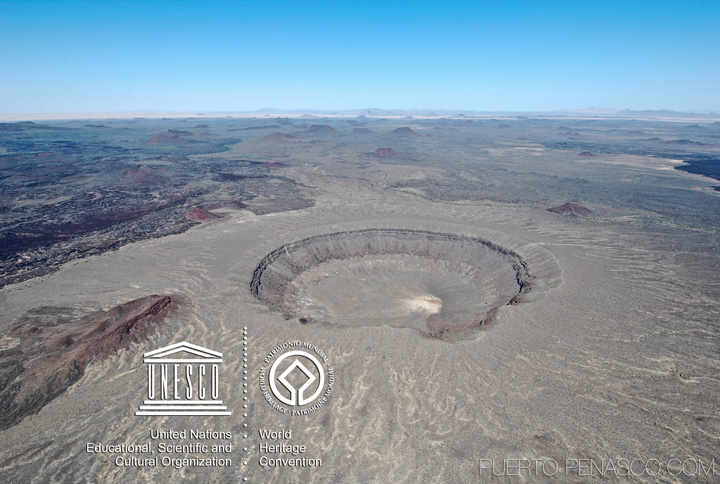 This pressure, along with the molten lava following it, finally exploded up through the desert floor, mostly here, but also in other spots all along the way to the shores of Puerto Peñasco that can still be seen today.

Soon, tall mountains were formed that continually oozed lava out from their tops, until one day those ‘tops’ sealed & hardened from exposure to the air.

The hot magma pools below were still very active, and soon the tops of these local ‘mountains’ exploded scattering hot lava pieces & chunks, which would soon cool to black rocks, all over the deserts floor.

The ‘Pinacate Biosphere Reserve’ is unique as one of the few Archaeological & Geological areas in the entire Southwest that remains mostly untouched by human hands, nature or development.

Created here is an area unique in all the world, with it’s moon like craters over a mile wide, lava tubes, ‘moon-scapes’, black pumice soil, cinder cones and sleeping volcano’s.

Pinacate’s Reserve currently encompasses over 600 square miles, 400 cinder cones caused by ‘exploding volcanoes’, along with tunnels, ash & rock that can be observed scattered for miles in the area.

Nine massive volcanic craters remain from this time created by these effects & their later contact with water causing violent ‘steam explosions’ that sent millions of pounds of rocks-debris into the sky.

Currently, the area is ‘dormant’. 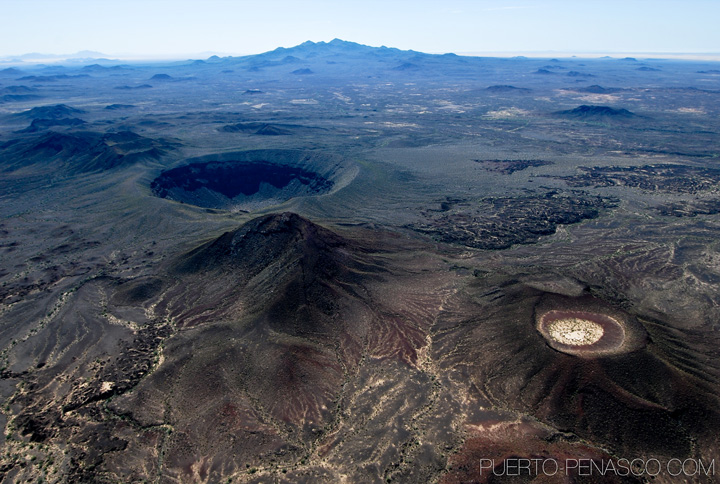 Little Known Fact: In 1970, the Apollo 14 astronauts trained for their moon landing at Pinacate, as the rough, barren landscape was the closest ‘match’ they could find to the lunar surface. NASA (and others) have some neat images of the crew trudging around and working with various instruments – while in cowboy boots, natch.

There is no water available in the reserve. You must bring your own. Bare minimum of 1 gallon per day per person is advised. Also include extra for vehicle radiator, cleaning dishes, personal hygiene, etc.

Check in at the Information Center prior to traveling out into the Reserve. There is no Entrance Fee, but donations are always greatly appreciated.

There are some poisonous animals, snakes & insects in the reserve (rattlesnakes, scorpions, black widow spiders, Gila monsters, etc). Do not disturb the animals, turn over rocks they might hide underneath, or place hands-face-legs into holes or caves. Ask Reserve Staff members for more information on visitors safety.

High vehicle clearance is advised, 4 wheel drive recommended but it is not required.

Rojo Cono -Capacity: 20 people-Location: 14 miles n/w of the info center-Great spot for hikers up to the volcanic peaks

Backcountry Camping: Limited to 3 per party. Campsite must be 1/2 mile from any road or crater

With advance approval groups with scientific/academic purposes may be allowed to camp in other areas – Contact the Reserve Director, or call the main number – 011-62-159864

Annual daily averages range from 65 to 72 degrees, with an average maximum of 118 degrees. 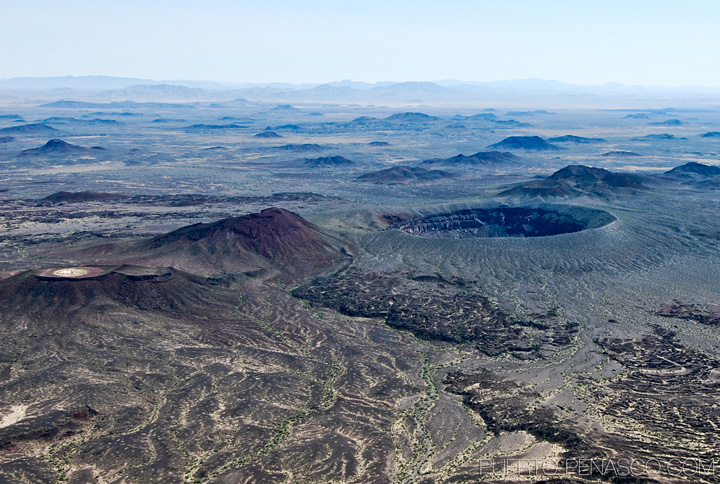 The volcanic craters and surrounding mountainous areas have long been host to human habitation dating back over 20,000 years. During this continuing link to the past, numerous Indian tribes/bands have lived, and used the area. During that distant past the area had been rainy & damp supporting plants and animals long since vanished from scene. With the coming of the Holozoic Era, approximately 10,000 years ago, dynamic climatic changes occurred turning the area into the desert we experience today.

Firearms are prohibited in the reserve, and open fires are not permitted. Rocks, minerals, artifacts, etc. are protected items and may not be picked up, moved or removed from the Reserve. No plants may be collected, removed or harmed in any way and are protected by law.

Take out all your trash-litter is strictly forbidden!

Vehicles must not leave the roads, and travel only on the public roads. You will be held liable for any damages caused by your vehicles tires leaving the roadways. Wildlife can not be harmed, or bothered in any way. Hunting, collecting or disturbing animals in any way is illegal and protected by Law.

As you might be aware, there really isn’t a whole heck of a lot of information out there about Pinacate. I have begun this small entry to log more information as a find it: