How is the weather in Puerto Penasco?

The weather in Rocky Point is almost picture perfect all year around.  In many months it will mirror the weather of Arizona.  In January and February you will days in the low 70’s and it will cool down at night to the 50’s.  There are some years we it has gotten down to freezing for a couple of nights, but the minute the sun rises, it warms up. 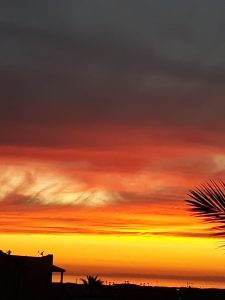 Sunset on the Sea of Cortez

From January through the 1st part of March the daytime temperatures are in the mid 60’s during the day and it normally dry, so it is cool and comfortable.  During the months of April though May it will be warm with daytime temps being in the 70’s.  The summer months of June through mid October, the daytime temps are in the high 80’s and will be hot and humid/muggy. From mid October through the end of December temps will again be in the mid 60’s to the low 70’s and will be comfortable.  In the winter months, bring a light weight jacket or sweater for the evenings or if you are going on a sunset cruise. 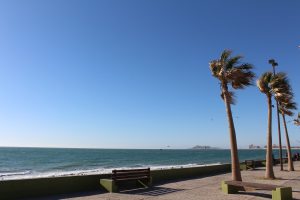 The sun shines almost 365 days a year, with the exception of July through September 1st and December through January as these are considered our rainy months.  On average Rocky Point get under 3″ of rain per year.  This will vary depending if it is a La Nina or El Nino year.  The Sea of Cortez is great for swimming.  The water temperatures from December through April will be in the 60’s. From May through through November the water temperature will range from the mid 70’s to the high 80’s.

July, August and September are considered miserable and oppressive with the humidity reaching 90% in August.  But remember that you can go into a pool or the Sea of Cortez to cool off.  Years ago these months had no tourism to speak of. Now, in these months, we are running at nearly 100 %  capacity with home and condo rentals.  You will see a lot of cars from New Mexico, Texas, Colorado, Utah and many other states from the Pacific Northwest.  There are many cars from the interior of Mexico as we are the closest sea port for them.

Puerto Penasco is not prone to having hurricanes, due the Baja Peninsula that blocks them.  We do however get some of the wind and rain, depending on where the storm is going.  If a tropical storm or hurricane comes up into the Sea of Cortez, they usually go inland farther south like Kino Bay or that area.

If you are coming to play golf or go fishing, you can do either one every month of the year.  If you are planning to drive down in summer, remember to carry extra water and snacks.