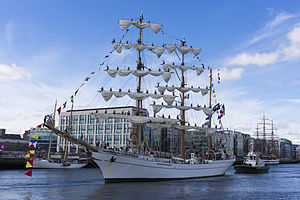 Mid May will be an exciting time for Puerto Peñasco, with the arrival of the Mexican Navy Ship “Cuauhtemoc” or as it is known Caballero de los Mares which means The Gentleman of the Seas.  It will carry a crew of 240 including 8 captains, officials as well as 100 male and female cadets. The cadets will be able to come on land while in Rocky Point to  learn about this part of the Sea of Cortez.  While at sea the cadets will undergo training and studies.

The ship will be anchored 1 mile offshore in front of the Malecon for locals and tourists to be able to view it.  This incredible ship has made 36 training voyages and traveled to 209 ports in 59 countries.  It has traveled over 5522 days at sea and traveled 705,000 nautical miles which is equal to 33 times around the world.

The history of the ship is amazing. It is 220′ long and 39′ wide and is named after Huehi Tlatoani Cuachtemoc. Built in Bilboa, Spain it was known as Celaya. It had 3 sister ships as well. It was launched Jan. 8 1982 and commissioned  July 29, 1982. For its 39 years of service is home port is Acapulco, Mexico. It is a Class A ship and sails under the Mexican Flag.  In its years of sailing it has won the Tall Ships’ Races two times.

Tall ships are amazing and are used many time for people who like to cruise, but want to do it on a smaller size vessel. Tall ships also can accommodate much smaller amounts of cruisers than a regular cruise ship,  thus allowing them to more access to remote areas.   You normally think of them for cruising not as a training ship for the military.

We are hoping to perhaps be able to go onboard like people of Rocky Point did when the Astoria Cruise Ship came last year for its cruises.  It is not often that the small ports get so much attention. As of this writing it looked like it was near Ensenada and then will turn, go south and come up around the tip of Baja and into the Sea of Cortez to Puerto Peñasco.

Come out and join the fun while enjoying the beautiful weather in Puerto Peñasco and the stunning  Sea of Cortez views.  Remember Rocky Point is only a 4 hour drive from Phoenix or Tucson.

If you any questions Contact Us at Blog@Puerto-Penasco.com or nocomosi@msn.com.